BitePRO® Survey Confirms Many Professionals At Risk Of Being Bitten

This article presents findings from a random international BitePRO® survey, which was administered from Monday 16 November 2020 to Friday 04 December 2020.

One hundred and seventy individuals from nine countries completed the survey, primarily coming from sectors, such as mental health care, special educational needs and nursing.  Individuals were invited to participate via different digital marketing and social media platforms.

The objective of the study was to quantify customer feedback, social media comments and industry knowledge on the subject of the risk of human bite injuries in the workplace.  There is very little information available on the subject and I wanted to learn directly from the people at risk of being bitten, on how they think and feel about the subject.

On closing the survey on Friday 04 December, I was truly astounded by the findings.

95% of the respondents confirmed that they had experience of dealing with biting, scratching or pinching behaviour in the workplace, and 89% had personally been bitten, scratched, pinched or bruised as part of their role.  From that I think we can agree that the respondents know the subject matter and have a valuable viewpoint on the topic. 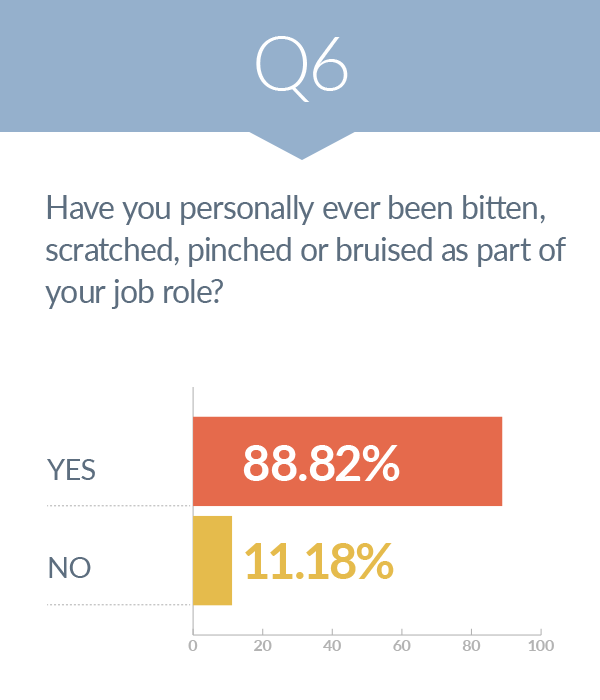 In terms of the findings my biggest learning was the overwhelmingly positive link between the use of bite resistant clothing and a reduction in the need for restraint.  Personally I had no idea that restraint (of any type) increased the risk of a bite or injury to a worker and their team (83% agreed).

93% of respondents agreed that reducing the number of crisis or meltdowns that an individual suffers reduces the need for restraint.

There were three specific pieces of information that really shocked me.

The first was that 50% of the people who had completed the survey had needed to seek medical attention as a result of a bite injury sustained in the workplace. 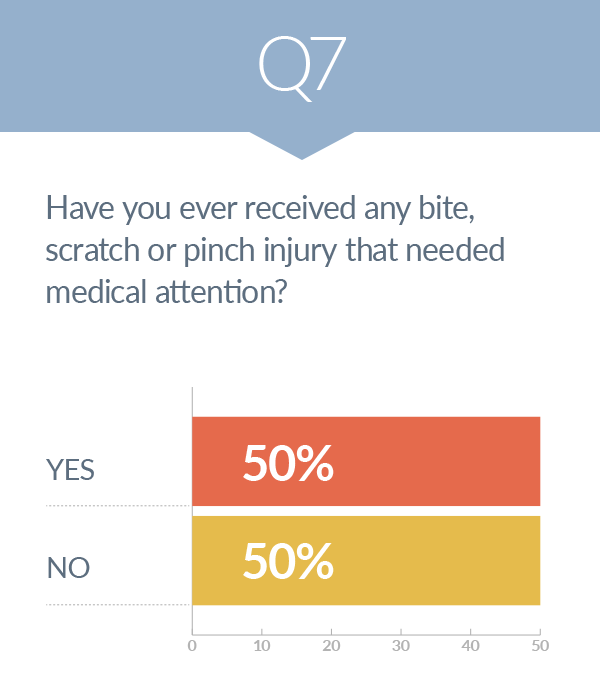 This tells me that professionals who are subject this risk need more support and protection from their employer.  No one should go to work and get injured, I completely accept that accidents happen but is enough being done to protect professionals who face this risk?  The fact that 76% of respondents said that they have felt psychological stress or distress from this just emphasises that further.

The second point that really shocked me was the use of “make shift” protection. 45% of respondents admitted to using items such as foiled bubble packing, weight lifting gloves, denim or leather jackets, shin pads, towels wrapped around arms and mixed martial arts protective clothing, to name but a few.

The third and final point, which rather shocked me was that over 97% of the respondents agreed that the general public do not realise that being bitten at work is a genuine risk to people working in healthcare, mental health and special educational needs settings.  This belief is certainly held up by a large amount of comments that we receive through social media where people make jokes about our clothing and why it is needed. 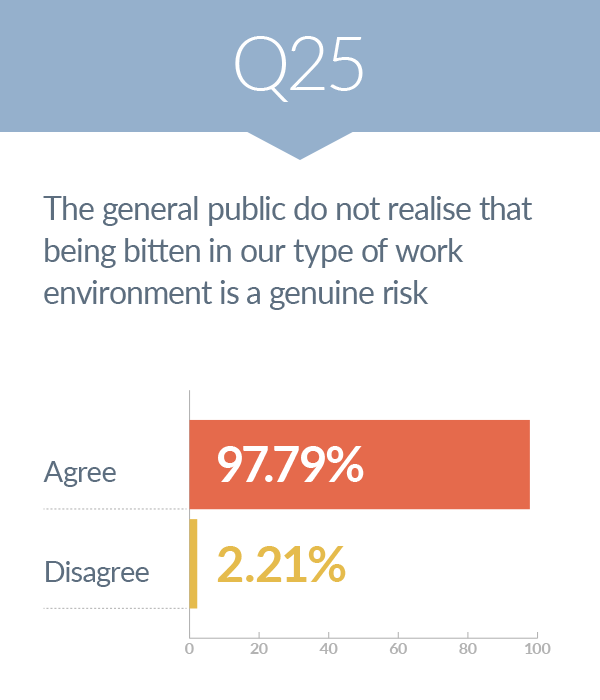 It is a very emotive subject, and one which can be difficult to broach with people and companies who do not always want to talk about staff being injured. Some may even be concerned about potential internal repercussions when talking freely about worries, concern or personal experiences.

On a more positive note there we some very uplifting findings from the survey which include: 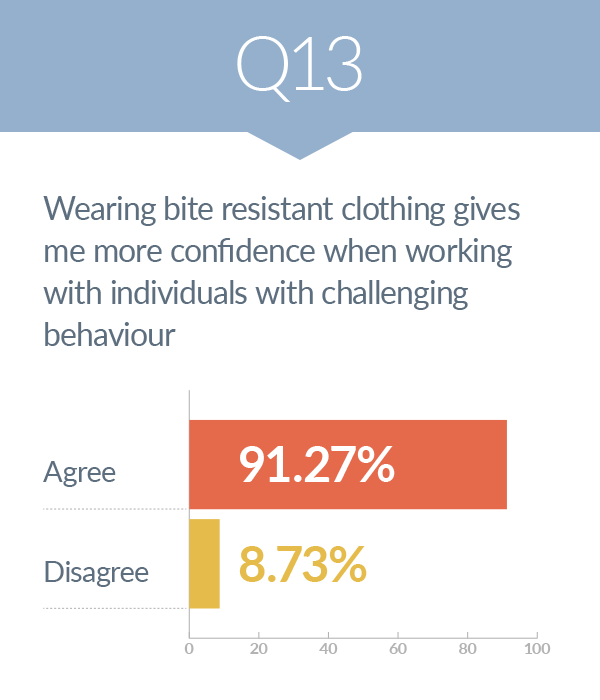 83% of participants confirmed the number of bit injuries had been reduced since wearing bite resistant clothing! 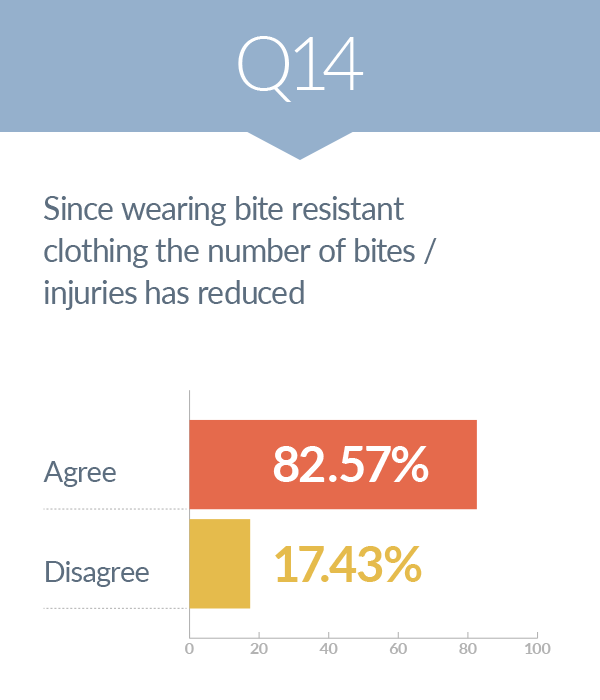 92% agreed using bite resistant clothing gives staff members additional confidence going into a situation that they will not be hurt so can get closer, act quicker and take control of a situation before it escalates further.

The survey also concluded that escalation could involve the use of restraint, which 83% agreed increased the risk of a bite injury to them and their team. 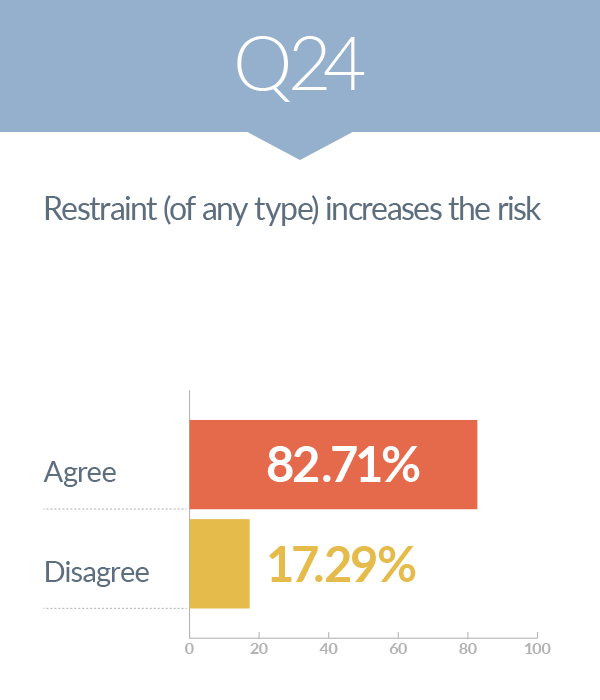 As a result of the survey I did some further research into the restraining aspect in relation to this survey. This is something, I must admit, I had very little awareness of.

I was astounded to discover that the UK Government passed legislation back in 2018 which was supposed to  restricting the use of dangerous restraint practices against patients in mental health units.  The UK’s newspaper The Guardian reported on 30 November 2020 that the legislation requires psychiatric units to reduce and record the use of restraint against patients and to train their staff to use de-escalation techniques instead to defuse difficult situations.

Given the findings of this survey in relation to people wearing bite resistant clothing being able to de-escalate situations with more confidence it struck a real chord with me as one way to help mental health workers in such difficult situations.

Sadly this is not just a UK problem, there are numerous reports of improper use of retrain in the USA too.  A quick search brought me to an article in The City about New York where face-down and prone restraint of children is still legal and common practice.  I was utterly shocked to discover that a 16 year old boy died this in may this year as a direct result of a prone restraint.  The incident happened at a facility for teenagers with behavioural problems and mental health needs, three people have since been charged.

The common theme in both of these articles is a movement from restraint towards de-escalation techniques which will obviously be a much needed improvement but difficult transition.  If bite resistant clothing can help in any small way to way to de-escalate a situation where a teacher, mental health worker, carer or nurse feels at risk of injury when doing their job, that I am proud to be able to support them.

Moving forward I plan to pull together a whitepaper based on the findings of this survey which I hope to publish shortly.  This can be shared with current and prospective customers to help with risk assessing in this area. It will hopefully raise much needed awareness of the issue.

I would very much like to build on the success of the survey and develop it into an annual event.  If you would like to discuss the findings of the survey or bite resistant clothing please contact us.

Please note that human bite wounds may not seem dangerous, but the risk of infection is high. These wounds contain very high levels of bacteria. Even though the wound may appear minor, an infection can lead to a severe joint infection and transmissions of viruses, such as Hepatitis B, Hepatitis C or HIV are as well a real possibility. About one third of all hand infections are caused by human bite wounds.