Sometimes I am being asked if bite resistant clothing is really ‘necessary’ for homeland or private security professionals.

Can the consequence of a human bite really be so severe?

A more detailed answer can be found in our website and online shop: www.bite-pro.com but in short... let's see what those public facing professionals tell us and what we can simply read in the news and research on the ‘net’: 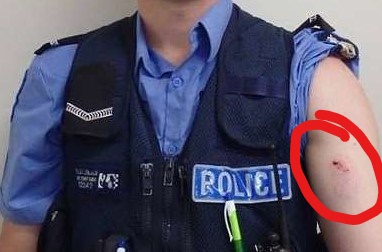 Regrettably, there is still a culture in some security companies that being bitten or being assaulted is all part of the job, but I hope we all agree that no one should ever have to go to work with the expectation of being assaulted.

The fact of the matter is that it is a truly daily occurrence. Those charged with protecting us and our infrastructure and those charged with enforcing law and order are at risk of being assaulted every single day they go to work. People get drunk, they consume illegal drugs, they commit crimes, they try to avoid identification and resist arrest. Every single time this happens and a police officer or security guard engages with such subject the risk of being bitten becomes ever so real, and the consequences can be absolutely life changing. Human bites can be as dangerous as or even more dangerous than animal bites because of the large quantity and types of bacteria and viruses contained in the human mouth. Human bites that break the skin can become infected, and even such wounds may not seem dangerous, but the risk of infection is high. They have been shown to transmit hepatitis B, hepatitis C, herpes simplex virus (HSV) syphilis, tuberculosis, actinomycosis, and tetanus. Evidence suggests also unlikely, but possible transmission of the human immunodeficiency virus (HIV).

Many public facing frontline and enforcement professionals around the world are now calling for greater protection from children who bite them. They came to the understanding that human teeth breaking their skin can lead to serious injury, infections, long term trauma and require complex surgery.

Law Enforcement and security professionals retire on medical grounds, they walk away from the profession they were once extremely passionate about, because medical experts have been able to identify that they suffer from PTSD (Post Traumatic Stress Disorder), a widely discussed and publicised illness, usually associated to soldiers returning from wars, having witnessed some of the most disturbing levels of violence.

So, to answer the questions I have asked right at the beginning… BitePRO® Bite Resistant Clothing might not change the behaviour of the public. But there is no question about it, bite resistant clothing will reduce the level of physical pain associated to a human bite, it can and more importantly it will reduce the risk of injury and infections. It will prevent immense long-term emotional distress to those man and women who protect us, our infrastructure and our countries.  It will help them to continue working within a sector they are most passionate about.

Please view our brief video by clicking on below image:

But, allow me to also point out the legal aspects of this subject. Today’s legal environment will require (especially in schools) a risk assessment to be conducted, highlighting any realistic risk employees are being exposed to e.g. being bitten by a member of the public.  The purpose of such is to very clearly identifying a) the precise risk, b) the potential liability and c) the implementation of effective mitigating measures. We believe that BitePRO® should be considered as one of many mitigation measures you can utilise and implement to reduce a realistic risk faced by today’s professionals.  Failing to do so can ultimately result in liability claims and legal action being taken against your organisation by either an injured employee or indeed an overseeing government body.

The fact of the matter is government agencies and private security firms are required to provide a safe and healthy workplace: It is the law… it is not optional.